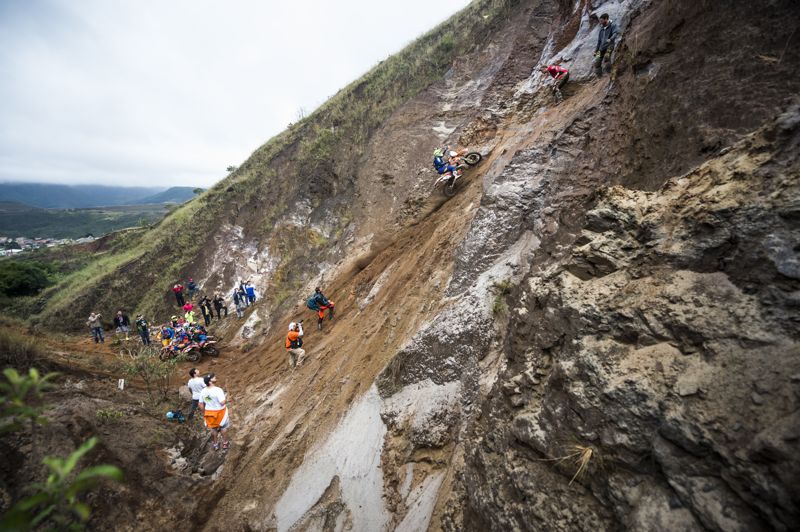 I hear Eric saying to a camera that they’ll be leaving in five minutes. I wait for each Brazilian rider to try once (three riders) and then, it’s my turn. I need to get up the hill and keep my back wheel on a rock so as not to come crashing down. If I make it up I know Mike and the others will help me. It’s beach sand. I look up to Mike and spot him rolling up his sleeves. I get into second gear and twist the wrist. «I have you, I have you!» Even now, his words are stuck in my mind. Mike was looking into my eyes as I was saying to him «do not let me go» but without words.

In Hard Enduro, when someone says ‘I have you’ it doesn’t mean you can have a break. What it means is that you can keep pushing! They give you a hand and help you get to the top, then I take a breath and continue with my race. Racing in Minas Riders was my birthday present. By brother Alfredo organized everything and made it happen. He spoke with  some friends in a team to lend me a bike and be my assistance and mechanics for the race (thanks Q4 Team!). The weekend before the race this same team had organised a course I coult take part in to pay for the trip. As I’m currently a semi-official Husqvarna rider I asked both my Spanish and Austrian bosses if I could ride with a KTM as there are no Husqvarnas in Brazil (yet!).

The race starts in Ouro Preto, an old and typically pretty city in Brazil. In the city center they’ve put together a slippery prolog wheren we all try to keep our balance under the rain. I finish ninth out of total ten riders, but what a riders! On the first day,Thursday or as they say in Brazil ‘quinta’, the race starts at 7am. There is a strict rule that at 5:30 pm if we are still in the race we must go straight to the paddock, despite having no idea how to get to the paddock!

I take it step by step, the first kilometers are easy, just riding like the rally stage of a usual Enduro. But in less than 30 minutes everything changes. I can see some Brazilian riders pushing up in the river. I go step by step, Alfredo told me that I should remember to drink, eat and to breathe in. I have a watch with the chronometer on the handlebar to know how long I’ve been riding for. I know I have a maximum of nine hours riding time and I must remember when to eat. I arrive at the Service Point around 30 minutes after Alfredo. I’m feeling happy. After the Service Point I start to think that Alfred may have got it wrong saying I could race in Gold class, he told me it wasn’t to much more difficult than some of the races I have planned to go soon…but omg!

I continue to take it step by step… I had to help some Silver and Bronze riders who were pushing as we’re on the same part of the track. The road is too small for two bikes. I rode their bikes and then pulled the up  from the front wheel. I push on, step by step I was doing the track without too many mistakes. I see nobody to help me in the immense jungle, just a long hill with a lot of corners and steps of slippery rocks. I find help from three Brazilians (sometimes they helped me, other times they just watched). These guys were great, one of them was without shoes! I was afraid of stepping on his toes so I spent the whole time looking out for him just in case! The one big mistake I made on day one, was a big crash doing a downhill (not riding, just pushing my bike). I was doing it Ok but suddenly the back wheel went down. You really don’t want that feeling when you look down on a hill and you don’t know if there might be a cliff at the end or something! I taken the bike by the front wheel as well as I could and I tried to shove the bike the way I saw the other 9 Gold riders did. Even now I don’t know how I solved that one.

After the downhill we race along flagstones and small rocks for a long time, this wasn’t very difficult but very slippery. I somehow dropped the exhaust and had to solve it with bridle. Even after that crash on the downhill I can’t believe how hard these bikes are. All that went wrong throughout the race is I dropped the exhaust. A quick fix later and I was back on the road!

I arrive to the Check Point and according to my watch I’ve spent around 7:20h of the race (I don’t remember exactly).  I then think to myself, this is perfect because I still have 1.40h to do the last CP and finish the day within the nine hours limit. But the control guy didn’t let me go. The track manager established a maximum time to be in each of the CP so as for us not te be in the jungle at night (or the hours of darkness) as it could be dangerous. I missed my chance by around 20 minutes (you could think 20 minutes seems like a lot, but now when youve been rideing for more than 7h).

At the time I wasn’t happy with them stopping my race but when I think about now, I understand the organization. When you’re on your bike in third or fourth gear on a narrow track and you look to the sides and all you see is jungle, cliffs and fog and you know you’re alone, totally alone you think about the consequences of a crash. All you can do is grab your phone from your camel back and and pray for signal….This is when you concentrate on the one thing that matters, do not crash!  The helicopter couldn’t fly that day because of the fog and the rain which was non-stop.  This is when you step back and think about where you are for a moment.

In total I rode almost nine hours.  I arrived frozen to the hotel and with the exhaust in my hand as it fell off again on my way to the paddock. Taddy saw me arrive and he didn’t know how he could help me; ‘what can I do?!’ he said, hahaha. I jumped directly into the shower and I stood there for about 30 minutes. Alfred ran into my room screaming if I was OK, asking whether I’d done the race alone or if I’d had people to help me. He almost seemed nervous. He said last year it was dry and with a lot grip but this year…you cannot imagine how slippery the rocks were… and then there’s that jungle sand!

Alfred, Taddy and the others told me that there was people watching the race but I saw nobody. No body helping except those three Brazilians. What a day. In Hard Enduro Rally races you get the chance to fail for time on the first day so I got a start the second day. I high fived Alfred and watched him as he left start line. A few minutes later it was my turn starting. The firsts kilometers were some up hills with slippery stones (the track manager gave us a heads up) I rode very clumsy with barely any grip, but as I found out later everybody had the same problem.

Soon I arrived at the canyon where the spectators watched us (most of the time you know, that where there is people watching, it’s a hard section!). I was right! The first I see is a Brazilian Gold rider (one of the three who ride together) walking up the hill without his bike. When I get to the famous step of the video, I see the viewers close by but they don’t seem too eager to help me. They ask me whether I want help once I make it to where they are (to the top). I thought like I usually do: if Alfre and the other golds did it, then it is possible. I tried to get up to a little ledge (and made it) but nobody helped me and I crashed back down. I felt OK and the bike wasn’t broken. I only lost my Gopro but someone reattached that so we were good. The crowd decided to help me and they threw me a rope. Some meters down the track I meet Eric and three Brazilian Gold riders who are trying to go up by a long sand hill. Mike was trying to help them at the top but the Brazilians couldn’t make it to him. I only tried it one time. I think this was my moment of glory this race, Mike was shouting “Sandra you have it, you beat them, they didn’t arrive where you are”.

It’s difficult after many years fighting with myself trying to learn how to win, I now know  that there are some races where be the winner is not the one with the biggest trophy. At least, for now. It’s only my second year in Hard Enduro, and I still need to learn. So, to pass three Brazilian riders who where racing at home on their own bikes and helping each other was difficult.

After this there were some more sandy hill where I spotted tyre prints zigzagging up so I did the same. Right after that, I manage to make it to the Service Point within 3h. I had made it to the SP before the Brazilian riders. This is where we came across the problems with the police. The organisers announced that the Gold Class could continue the race.

The afternoon wasn’t easy. Day two meant another 9h on the bike. I got to the paddock as night fell. After dinner, the organisers made an announcement at the debrief. The local authorities would not allow for the race to continue.

I am happy with my result, I can consider myself a ‘half-finisher’ as we only got to ride for two of the four days. I am happy and have learnt a lot. I made it up steps and other sections that I didn’t know I could do. I’ve now raced with the elite in the Gold Class and proved to myself that I can do it: It is only my second year in Hard Enduro and feel extremely happy of how I felt in that immense jungle! Thank you Alfred for my birthday present and sorry Mum and Dad as I know you were suffering at home. I’d particularly like to thank all the Q4Team, Kielder, Marcelo and Mestre. And finally, thank you to all my awesome sponsors and all of you for reading my adventure! See you in Redbull Erzberg Rodeo!!